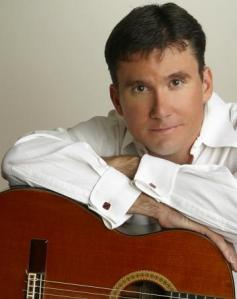 Peter Fletcher joins us again Oct. 3 at 6:30 p.m. He is a classical guitarist based in Detroit and New York City who performs over 100 concerts a year, and his recordings on the Centaur Records and Towerhill Recordings labels have been critically acclaimed.

Peter offers an audience-friendly, solo recital featuring a repertoire that runs the gamut from the Renaissance Period through the 20th Century.

His current recital program features the Prelude from Cello Suite No. 1 and Lute Suite No. 3 by J. S. Bach, Paganini’s exciting and ever popular Caprice No. 24, the fiendishly difficult Five Bagatelles by British composer William Walton, and the great Spanish masterwork Cordoba by Isaac Albeniz.  Peter will also perform some of his transcriptions from his Satie album, released on Centaur Records, CRC 2731, and works by Dowland, Llobet and Segovia.

Peter has recently had a recital at the prestigious Carnegie Hall in New York City and we are so happy that he has agreed to return to the Princeton Public Library for another concert.  You won’t want to miss it.