The Princeton Public Library will present an historical look at WWII during a Tuesday Oct. 16 afternoon program with author and documentary filmmaker Rick Beyer. At the special time of 2:00 p.m. Rick will present “The Ghost Army of World War II: How One Top-Secret Unit Deceived the Enemy with Inflatable Tanks, Sound Effects, and Other Audacious Fakery.” 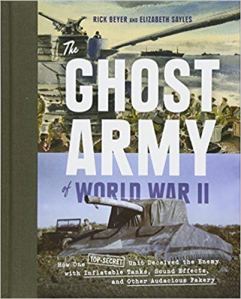 “The Ghost Army of World War II describes a perfect example of a little-known, highly imaginative, and daring maneuver that helped open the way for the final drive to Germany. It is a riveting tale told through personal accounts and sketches along the way—ultimately, a story of success against great odds. I enjoyed it enormously.” – Tom Brokaw

In the summer of 1944, a handpicked group of young GIs landed in France to conduct a secret mission. Armed with rubber tanks, fake artillery, and more than a few tricks up their sleeves, their job was to create a traveling road show of deception on the battlefields of Europe, with the German Army as their audience. From Normandy to the Rhine, the 1,100 men of the Twenty-Third Headquarters Special Troops, known as the Ghost Army, conjured up phony convoys, phantom divisions, and make-believe headquarters to fool the enemy about the strength and location of American units.

Rick Beyer’s engaging multimedia presentation includes photos, maps, and video clips. Many of the participating soldiers were artists, including future fashion designer Bill Blass and painter Ellsworth Kelly, and Beyer weaves their wartime art into an incredible tale of creativity being used to save lives.  Tom Brokaw called Rick’s book “a riveting tale told through personal accounts and sketches along the way—ultimately, a story of success against great odds.”

Be sure to note the early time slot of 2 p.m. Tuesday Oct 16 so that you don’t miss this opportunity. The program is free and open to all who wish to attend.