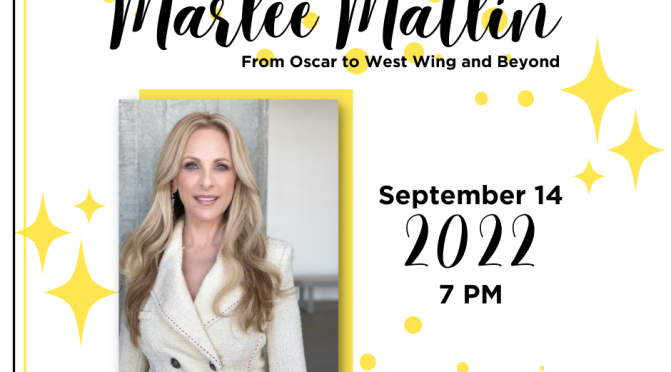 Princeton Public Library is joining libraries across the state of Illinois to host award-winning actress and Illinois native Marlee Matlin. In celebration of Deaf Awareness Month, Matlin will share the highs and lows of her Hollywood career and journeys as an activist. The event will be held virtually on Wednesday, September 14 at 7 p.m.

The virtual event is free and open to the public, but registration is required.  REGISTER HERE.

The youngest recipient of the Best Actress Oscar for her film debut, Matlin’s acting career never slowed down. She went on to receive Emmy nominations for her television work including roles on Seinfeld, The West Wing, and Law & Order: SVU. Most recently, her Apple TV+ film CODA swept every category it was nominated in at the 2022 Academy Awards, including Best Picture.

In addition to acting, Matlin broke barriers when she starred on ABC’s Dancing with the Stars. She has written three children’s novels, a bestselling autobiography, and released an app to help teach American Sign Language to millions of smart phone users.

A longtime advocate for Deaf rights, Matlin continues to break down barriers for herself and others through her acting, awareness, and writing. As she has so aptly stated, “The only thing I can’t do is hear. The rest is there for the taking.”

This inspiring conversation will be offered in ASL and translated through an interpreter.

This event is presented in partnership with Illinois Libraries Present, a collaborative effort designed to bring virtual events with bestselling, esteemed, and diverse speakers to library patrons across the state. More than 140 libraries have joined the second season of Illinois Libraries Present which is funded in part by a grant awarded by the Illinois State Library, a Department of the Office of Secretary of State, using funds provided by the U.S. Institute of Museum and Library Services, under the provisions of the Library Services and Technology Act (LSTA).

MASKS are optional, but encouraged.
Princeton Public Library has resumed normal browsing, but lobby pickup for book and DVD orders is available for those patrons who prefer it. Please let the Circulation Desk know if you want requested materials held at Circulation or checked out for lobby pickup. Study rooms and computers (including Youth Services computers) are available, but we have not as yet returned the toys to Youth Services.

Get to know our great resources! Video and web-based tutorials included to help you navigate the wonderful tools at your fingertips with your library card.

NEW BOOKS AND DVDS AT PPL

Send Us A Message